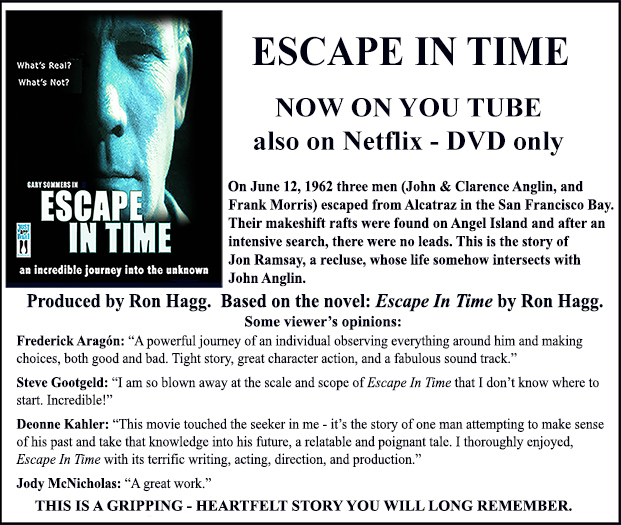 ESCAPE IN TIME is available on Netflix – DVD

Escape In Time, is a tale of discovery, hope, and liberation, set in the backdrop of Northern California’s beautiful Humboldt County.  The story is told through the eyes of Jon Ramsay, a janitor at Humboldt State University.  A recluse from society, Jon lives isolated from the world.  He is hardly noticed at his job and is considered a shadow in the small town he lives in.  Jon is trapped in his life.

One night, Jon begins to have dreams: unfamiliar images of violent crimes and robberies that took place nearly forty years in the past.  Too strange to explain, but too vivid to ignore.  Through the course of the film, we discover that he has tuned into the life of John Anglin who was involved in the most famous escape from the world’s most infamous prison: Alcatraz.

As Jon’s dreams become more frequent, we see the two stories juxtapose, and it becomes clear that they both have the same goal—Escape.  The two stories come together in the climactic ending on Alcatraz Island, as one man escapes jumping into the frigid waters of San Francisco Bay, and the other escapes the bounds of his own fears, and is free to change his life.

Escape In Time captures the universal human dilemma of rediscovery, rebirth, and the power of determination through stunning visuals, and rich and heartfelt characters.